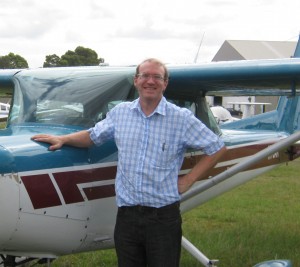 Redshift Wireless was founded by Darryl Smith in 2013 in order to help ordinary people reduce their Greenhouse Gas emissions, and also reduce their energy usage. After years of analyzing energy consumption and energy saving techniques he came to the conclusion that the best way to save energy is to concentrate on the big ticket items first, under that the belief that the biggest savings are where the most energy is used. Also, rather than trying to build a business around using grants or complex business practices to save money, the best way to do it is to create a product with a payback period of under a year.

Darryl studied Electrical Engineering at the University of Technology, Sydney. He majored in Telecommunications Engineering, doing electives in the fields of Power Engineering and Control Systems. He was also a Cadet Engineer, working for the state electricity generator, the Electricity Commission of NSW, later to change it’s name to Pacific Power. Upon graduation he remained with Pacific Power working in various locations including as a Plant Owner in a large coal fired power station, and to managing engineering documentation for the organization. He left the organization in 2002 with a voluntary redundancy, starting a private consultancy practice, Radioactive Networks.

Since starting Radioactive Networks, he has consulted all over the world, from Computer Graphics companies in Hollywood, USA to major sporting events such as the Olympics. He has done everything, from small telecommunications cabling jobs, to acting as an expert witness in a court case. Darryl took some time off, working as Chief Engineer, developing Smart Energy systems. During this time, Darryl’s analysis of the Australian Government’s Green Loans program was quoted in the final report into it’s management.

Since leaving his job as a Chief Engineer, Darryl has been involved with developing a collection of business concepts, with Redshift Wireless being the most compelling.

In his spare time, Darryl loves to fly in the plane that he helped construct and play with Amateur Radio, along with home automation. He holds the callsign VK2TDS.

Robert commenced his professional career with the Department of Main Roads, NSW in 1968. He remained in the road sector until he resigned in 1989 to join a major engineering consultancy until he retired in 2012. He has since worked in India as Team Leader for an Asia Development Bank Technical Assistance project. Over the last 20 years his focus has shifted from a primary road focus to a broader infrastructure asset management role.

He has provided asset management advice and services to government authorities in Australia, Egypt, India, Indonesia, Ireland, Papua New Guinea, Qatar, Thailand and United Arab Emirates. This has given Robert a wide knowledge of infrastructure management practices around the world with a focus on financial sustainability of asset management and practices, particularly of government assets.

Robert is well aware of the need for cost effective asset management operations and maintenance in an age of economic constraint. Redshift Wireless provides the opportunity to use his skills in working in cross cultural environments to provide the benefits of these developments to countries where there is a great need to conserve limited energy resources.

Our key Embedded Systems Architect has many years experience with embedded design. This includes all manner of embedded systems, including hardware and software.